We measured greenhouse carbon dioxide (CO2) concentrations within the  leaf canopy of roses grown for cut flowers over several years. Often, during the day we found the CO2 concentration was depleted to levels as low as 225 ppm, even though vents were opened. Apparently, CO2 was being absorbed quickly by the rose leaves and  fresh air was not moving sufficiently into the plant leaf canopy to replenish the CO2 to normal atmospheric levels (340 ppm in 1985).  This was also noted in a greenhouse cucumber experiment in Spain in 2005 , where CO2 was found to  be from 50 to 60 ppm lower than the atmospheric concentration during the day, again even though vents were open.  (Then atmospheric CO2 was measured at about 360 ppm). (See Sanchez, 2005 below ) 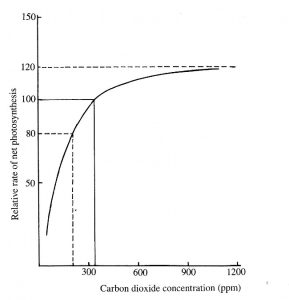 In the previous blog, I wrote about the potential benefit and difficulty of greenhouse CO2 enrichment above normal atmospheric CO2 levels. I showed that the opportunity for enrichment in climates that have high greenhouse ventilation requirements is limited.  So how do you make the best use of the existing CO2 (that is, with no enrichment)?

What are the effects of moving air on the leaf micro-environment, CO2, and photosynthesis? 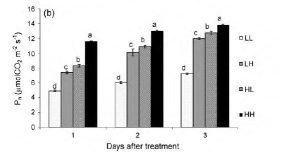 The benefits of moving air on photosynthesis has been widely studied. Here’s one example showing the results from an experiment on tomato  in growth chambers. This shows the effect of CO2 and air velocity on net photosynthesis (Pn)  See Thongbai 2010 below

Photosynthesis in both levels of CO2 (low and high) were enhanced with the Low to High velocity of air movement. The Low velocity is about in the low range of the recommended velocity of air flow with a greenhouse horizontal air flow circulation system (about 0.25 m/s = 50 ft/min).

So why the enhancement of photosynthesis?

Earlier research showed that insufficient air movement around plants generally limits photosynthesis by suppressing the gas diffusion in the leaf boundary-layer. This is the conceptual layer of still air that surrounds the leaf. With increasing wind velocity the boundary layer becomes thinner and resistance decreases (top graph).  More gas diffusion can take place through the leaf pores (stomata). With more  CO2 diffusion into the leaf, photosynthesis increases (middle graph). Consequently, transpiration (loss of water from the leaf through stomata) also increases (bottom graph). Excessive wind velocity and water stress will causes the leaf pores to close (not shown).  So there has got to be the correct balance. Not too much air movement, not too little, and the plants have to be irrigated properly in the first place