When anyone is searching for an LED lighting system for the horticulture purposes and the facilitation of plant growth, then likely he or she can be bombarded with the numerous options of lighting metrics. Currently, there are various manufacturers of lightning metrics and their outstanding products are available in the market. Some of the acronyms and terms that anyone is likely to see are PAR, LUX, PPFD, PPF, foot candles, lumens, watts, and efficiency of photons. All these terms are strongly related to the lightning but only a few products are essentially important and relevant to the horticultural lightning matrices. In this article, the acronyms and articles will be defined, and some common misunderstandings will also be corrected for helping the farmers to understand the applicable metrics about the horticultural lighting system. 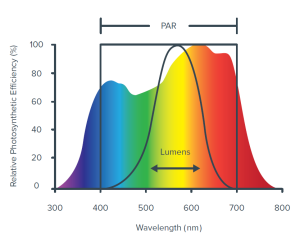 Lumens are Used by Humans

Light is perceived by the people and plants and the basic mechanism of both is very different. Many animals and humans use the photopic vision of light. This vision is utilized in the well-lit conditions, for the perception of light and true color. The measurement units for lumen are based on the human eye sensitivity model but it is done in the well-lit conditions. Due to this reason, the model is known as the photopic response curve. This curve is bell-shaped, and it shows how and why some human beings are more sensitive to the green light. The foot-candle meters and LUX are used for the measurement of the intensity of light for the residential and commercial lighting applications. The main difference between the candle meter and LUX is the unit of area for their measurements. For LUX, the measurement units are lumen/m2 and for foot-candle, the measurement unit is lumen/ft2.

By using the foot-candle meters, or LUX for the measurement of light intensity, for horticulture lightning matrices, a varying measurement dependent on the source of the light spectrum is possible, even if one must measure the same level intensity for PAR. However, there is an association of fundamental problem with the use of foot-candle meters or LUX for the measurement of the lightning intensity of horticultural lighting system is the underrepresentation of red (600 – 700 nm), and blue (400 – 500 nm), lights in the visible light spectrum. For the perceiving of light, human beings may not be much efficient in these regions, but the plants are most efficient for using the blue and red light to do the main process of photosynthesis. Due to this reason, foot candles, LUX, and lumens should not be used as horticulture lightning matrices.

PAR is known as the photosynthetic active radiation. The PAR light is defined as the wavelength of light that is lying in the visible range of 400-700 nm, which is the main constituent responsible for photosynthesis. Often PAR is used but sometimes it is also misused for the horticultural lighting system. PAR cannot be considered as measurement or a metric like kilos, inches, or feet. Rather than this, it can be defined as a type or kind of light that is needed for supporting the photosynthesis. The quality and amount of spectral light of the PAR is an important metric that should be mainly focused. Here the quantum sensors can be used as primary instruments, for quantifying the intensity of light for the horticultural lighting system.

There are three important questions, that one should be getting the answers for the measurement of a lighting system for horticultural purposes. These questions include the following.

For answering these questions in the most feasible way, there are three main metrics such as PPF, PPFD, and photon efficiency.

PPF is known as the photosynthetic photon flux. It is the measurement of total PAR amounts that are produced by the lighting system in every system. A specialized instrument known as the integrating sphere is used that is specialized for capturing and measuring. It is efficient enough to measure all the photons that are emitted by the horticultural lighting system. The unit for exposing of PPF is micromoles per second, (μmol/s). Probably, it is the second important way for the measurement of the horticultural lighting system. But due to some reasons, these metrics are not listed by the majority of lighting systems. Here an important thing to note is that PPF never tells about the amount of light that is falling on the plants. But for the calculation of an efficient lighting system, PPF is one of the important metrics.

PPFD is used for the term photosynthetic photon flux density, and it is used for the measurement of the amount of PAR that is arriving at the plant parts. Scientifically, it can also be defined as the number of photosynthetically active photons, that will be falling on the given surface area in each second. It is spot measuring of a specific location, on the canopy of plants, and its measurement units are micromoles per square meter per second (μmol/m2/s). For finding the true lightning intensity of any lamp over some designated plant growing area, it is extremely important to find the average of the various PPFD measurements at any defined height. Lightning companies are only publishing the PPFD at the central point of covering the area, which is grossly overestimated for the true lightning intensity of a fixture. 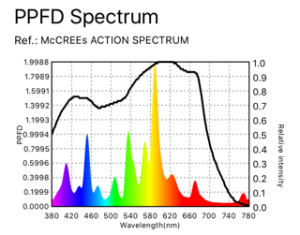 A single measurement is never considered as enough, as the brightness of horticultural lights is more in the center, whereas, the level of light is decreasing with the measurements towards the edges of the coverage area. To ensure the actual PPFD values over a well-defined area of the plant growth some specific things need to be published by the manufacturers, such as measurement of the distance from the source of light, (horizontal, and vertical), measurement numbering including minimum to maximum ratio and averages. Fluence has continually issued the average PPFD values over the definite growing area at recommended and specific mounted height for all kinds of lighting systems.

Photon efficiency is a term used to refer to the efficiency of the horticultural lighting system, for the conversion of electrical energy to the PAR photons. Various horticultural lighting manufacturers are using watts per square foot, or total electrical watts, as a metric for describing the lightning intensity. For the PPF the unit is μmol/s, and the units for watts are Joule per second J/s. The higher the number, the more efficient it will be a lightning system for the conversion of electrical energy to PAR photons.

For investing in the proper horticultural lighting system, to meet the standard criteria for meeting the cultivation related business goals, one should know the PPFD, PPF, and photon efficiency for making the right purchasing decisions. However, there is no need for the utilization of sole variables to make the purchase decision. Some other variables such as the coefficient of utilization and form factor should also be considered. If a company is not providing all metrics for the horticultural lighting system, then they are not selling the efficient lighting system. In such situations, one should not rely on the efficacy of their system. These metrics are always published by Fluence bioengineering and it is one of the leading companies in the photon efficiency related to photosynthesis. This fact is also verified by Utah State University and Rutgers.